As we have intensified our efforts to collect end-of-life electronics, we have marveled at the vast array of equipment that has been packed away in basements, warehouses and storage facilities all over the GTA. Word processors, typewriters, black and white televisions, stereo and high fidelity equipment, computers, beepers, telecommunications equipment, printers and other peripherals, clunky portable phones that weren’t very smart and the list goes on.

The amazing thing about all this ‘stuff’ is that when they were introduced to the world they were all applauded and widely accepted as true cutting edge technologies. 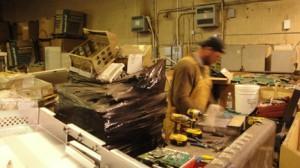 End-of-life electronics sorting and dismantling at our Oakville warehouse.

The Stats Around Electronic Waste Are Staggering According to the EPA’s most recent report, over 142,000 computers and 416,000 mobile devices alone are either recycled or trashed in the U.S. every day. And it is not only really old stuff that is being cast away. A study released by the Consumer Electronics Association in May 2011 revealed that the average U.S. household spends $1170.00 on consumer electronics each year. Personal computers are replaced every three to four years as operating and interactive systems are changed or revised and key software programs are no longer viable or supported on older platforms. Similarly, televisions are replaced every five to seven years and this process has been accelerated recently by the conversionfrom analog to digital programming and the introduction of high definition television. Rapid obsolescence is really a defining characteristic of electronic technology and so there is an urgent need to ensure there is a sustainable solution to the problem of what to do with older electronics. Certainly, recycling is the preferred alternative to disposal in landfills. The Symptoms of Rapid Change One of the more curious aspects of this rapid obsolescence, however, is that as technologies advance, the improvements are immediately put to work to more rapidly develop even newer technologies. In the tech world, this reality is known as Moore’s Law. It was inspired by Gordon Moore, co-founder of the chip maker, Intel, who essentially predicted that the speed and processing power of computers would double every two years. Create a new computer chip to boost the speed and processing power of computers and it will immediately be deployed to create a new generation of more powerful chips. This presents a real challenge for businesses who rely on technology and for individual consumers, who find themselves constantly playing a wasteful game of catchup. 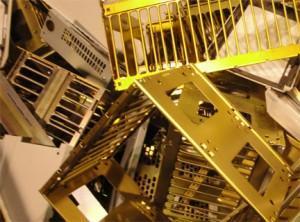 Computer frames. Created from many different alloys and metals.

Time Magazine ran an interesting discussion of this in an article dated June 19th, 2000. In the article, which is entitled “Is Technology Moving Too Fast,” the author, Stewart Brand, makes a number of incisive observations including a warning that rapid change can be deeply divisive. Perhaps we need to get off the train from time to time and create some type of normal which will allow us to catch up.  www.time.com/time/magazine/article/0,9171,997268,00.html.  Interesting Links A Day Made of Glass If you haven’t seen it yet, take a look at Corning’s fascinating video on YouTube entitled A Day Made of Glass at www.youtube.com/watch?v=6Cf7IL_eZ38 . It is a remarkable glimpse of what may be in store for us over the next few years. It’s Amazing What You Can Do With Scrap Metal

We don’t often think of scrap metal as appropriate building material but some folks in China seem to have a different view. In one case, a man built his own bionic hands and in another, a Lamborghini Reventon. Here are the links: