The Solar Roadways Project. The Biggest Green Idea Yet.

One of the more interesting aspects of being part of the green revolution is that you are exposed to new ideas and recycling technologies on a constant basis. Recently we came across something which really caught our attention.

Scott Brusaw of Sagle Idaho is an electrical engineer whose company, Solar Roadways, wants to build solar panels that will replace the asphalt that constitutes most roadways, driveways, parking lots and even the paved areas we play on in playgrounds.

On only four hours sunlight per day, Mr. Brusaw estimates that 428 homes could go off the grid for every mile of four lane solar roadway.

This idea is as simple as they come. But like all truly revolutionary ideas, it is pure genius.

Mr. Bursaw’s vision: “Our long range goal is to cover all concrete and asphalt surfaces that are exposed to the sun with Solar Road Panels. This will lead to the end of our dependency on fossil fuels of any kind.”

With LEDs, load cells and other electronics embedded in the panels, the possibilities are endless. Safer nighttime driving will be possible as the highways are illuminated. The roadways can be programmed for traffic management with warnings for drivers and pedestrians. Heating elements can be built in to prevent snow and ice build-up. These roadways can also be constructed with self-healing power grids, a practical system for electric cars and so on.

Implementation of the Solar Roadways system will create one of the largest green industries of all time. It will also dramatically affect the recycling industry as the Solar Roadway system is designed to incorporate  recycled materials for its internal support structure.

All of this on roadways that will pay for themselves over time, replace our reliance on oil and coal, help deal with the problem of global warming in a substantial way and provide health and economic benefits to boot. It’s a win win situation.

More Than Just A Pipe Dream 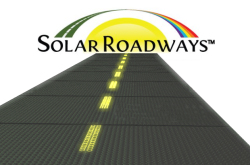 As the green revolution continues to grow, we see a lot of very good ideas come and go. But the Solar Roadways project seems to have some real traction. And why not. There is really no downside to it and for the most part, the technology is already available.

A prototype of the Solar Roadway has been developed with a grant from the US Department of Transportation. While there are clearly aspects of this that need critical evaluation, we think it is a truly awesome idea.

More information on the Solar Roadway project can be found at: