Steel Recycling – A Question Of Balance 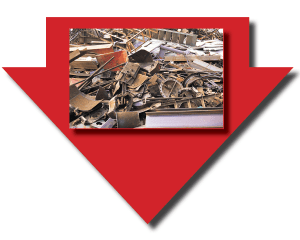 The Scrap Steel Dilemma
As we watch the price of scrap steel being driven down again this month, we really have to wonder how much lower prices could possibly fall.
Once the cost of handling, processing and transporting the material becomes greater than its value, it is then an expense and we can’t pay for it anymore. At some facilities in North America, this has already happened.
Ferrous metal recovery and steel recycling is a very capital intensive part of the scrap metal industry. As a result, the carnage has become visible on many fronts as mills, equipment manufacturers and even some scrap yards grind down to idle and beyond.

In the news very recently, for example, Sims, the largest metal recycler on the planet, has closed two yards in Chicago and is reviewing all of its operations. And, according to all the chatter, both Algoma Steel and U.S. steel, among other manufacturers, continue to have problems.

While there are other examples of developing concerns that we could site, perhaps the most compelling, anecdotally, is simply that at our public yards, we don’t see the same number of peddlers plying their trade. Those are the folks who pass by your house in the wee hours of the night before garbage collection to remove unwanted appliances and the like that you and your neighbours have left at the curb. It’s just not worth their while.

Why is this happening? One reason is that China accounts for about half of the global steel production and because its command economy has favoured steel production, there is now a significant oversupply as demand generally has cooled. This has reduced the requirement for scrap steel.

The Chinese regulators are well aware of the imbalance in the supply and demand characteristics of the steel market but rollbacks in Chinese production of steel are not something we are likely to see to any great extent in the near term.

Middle Class Shrinkage Is The First Domino In The Line

Of all the many other reasons we could find to help explain the situation in the steel market, however, the most telling are the sluggish economies here in Canada and around the world.

We desperately need a robust middle class of consumers who have the wants, needs and purchasing power to pull us out by our own bootstraps.China recognizes this and is now intent on consumer lead sustainable growth as an alternative to growth based solely on trade and investment.

You may have read the incredible stories of the ghost cities in China, move-in ready and fully “furnished” and just waiting for people from the rural areas to be relocated there presumably to work in industry. It is an urbanization policy of build it and we will make them come designed to support a developing middle class as the need arises.

So the question really is how do we re-engage our economies and deploy our resources in a way that will develop or re-develop the type of robust middle class that has been hollowed out by globalization and business models whose structural adjustments have so drastically altered the economic landscape.

Looking Before We Leap

In Canada, we had a federal election just a few weeks ago.

The campaign was polarized on many fronts but it is interesting to note that while all parties were intent on the importance of improving the lot of the middle class, the outgoing Conservative Party was focused on balanced budgets and tax breaks.

The in-coming Liberal Party was focused on utilizing the low interest rate environment to run a small deficit to kick start the economy with more infrastructure spending to get people working building roads and bridges and replacing aging infrastructure.

One of the most fascinating aspects of this whole debate was the context in which this campaign and these ideas were being given momentum.

We were only told that it was the largest trade deal ever contemplated with twelve countries involved representing 800 million people and 40% of Global GDP worth approximately 28 trillion USD.

Aside from the availability of lower cost imports, one idea behind these trade agreements is to enable manufacturing on a scale larger than a country’s footprint would warrant so it could presumably either export its production capacity or export what it doesn’t consume.

It is also true that these agreements generally address procurement rules which are designed to put all member states on an equal footing with domestic suppliers when awarding government contracts.

This type of national treatment requirement could waive Buy Canadian policies at specified levels of jurisdiction. Presumably, the advantage would be reciprocal access on equivalent terms in the markets of the other signatories of the deal.

We are all for trade, but honestly believe it’s a good thing that this trade agreement will be analyzed and reviewed by Parliament before it can be ratified.

We then will all have a chance to study exactly what is in it before we set money aside for infrastructure spending intended to help Canadian workers and the Canadian middle class.

A NY Times article on the Trans Pacific Partnership Agreement

Commodity pricing is complex. In our globally integrated world there are many variables at play in the pricing equation including currency, trade, investment, and the diversity of socio-economic policies.

In the final analysis, however, we will likely be seeing a new ‘normal’ for a while yet and we will all have to learn to adjust our thinking, planning and expectations accordingly whether we are buying or selling scrap metal or indeed in many other of the economic aspects of our lives.

Reminder: We always intend our remarks to be fair and balanced and are happy to receive your comments on any of the topics in our blogs.