In Canada, we are blessed with a real abundance of natural resources. Not all countries are as fortunate. This is especially true in the case of what is commonly known as rare earth metals. Something which has featured prominently in the news of late.

Rare earth elements are a collection of chemical elements in the periodic table. They have uncommon names like Yttrium, Cerium, Gadolinium, Lanthanum, Praseodymium and Dysprosium.

Paradoxically, despite their description as ‘rare’, these elements are actually found in relatively high concentrations in the earth’s crust (the exception being promethium which is highly unstable). Cerium, in fact, is the 25th most abundant element, with a concentration similar to copper at about 68 parts per million

The rare earth elements are often found together. What makes them expensive, however, is that they are comparatively much more difficult to mine and extract than other metals.

Although some were known as early as 1803, efficient separation techniques were not developed until the late 1950s and early 1960’s 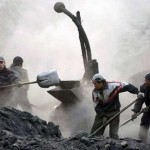 Driving the recent concern about these metals are their strategic importance to modern technology. Rare earth metals are used extensively in the defense industry, flat screen computer and TV production, electric car batteries and smart phones. Equally of concern is the high concentration of rare earth metal production in China. China produces around 97% of the world’s supply of rare earth metals even though they have only about 37% of proven reserves.

In a recent tiff with Japan, China cut its exports of rare earth metals to that country by 30%. This is very significant, given Japan’s technologically driven economy and the fact that Japan does not have its own supply. China, on the other hand, as is often lamented in  Canada about our own situation, wants to move up the supply chain, not content to be simply ‘hewers of wood and carriers of water’.

WHERE DO WE TURN FOR SUPPLY?

The race is therefore on to find alternative sources to meet increased demand and tightening supply restrictions from China. It is not an easy fix. Mines in Canada, Australia, Brazil, South Africa and the United States were closed in the 1990s when China undercut world prices. Restarting those mines or developing others around the world will take a few years given the many barriers to entry including environmental considerations.

So what are the Japanese doing in the meantime? This brings us back full circle to our previous blog on Urban Mining. With the tap turned down, Japan is fishing for these metals in the country’s giant heaps of scrap.

An article by Barbara Hirsch in the Santa Barbara View noted that the Japanese government recently launched an advertising campaign that included prizes offered as an incentive for people to recycle unused cell phones. Over half a million phones were collected in 100 days.

AsiaEye reports that in 2009, Japan’s Ministry for Economy, Trade & Investment highlighted recycling as one of four key pillars for securing rare earth metals. Last month, the Cabinet allocated 100 billion yen ($1.25 billion US) for a rare earths strategy almost half of which is for recycling initiatives.

Peel Scrap Metal has an interest in all of this since we are part of the supply chain in the recycling of certain types of electronics. In Ontario, we have WEEE – the electronic stewardship program, a program which has been roundly criticized by some of the ‘experts’ for its not-so-forward thinking. We will take a look at that in a later post.

For more information on rare earth metals and the recycling efforts to keep them in plentiful supply, visit: