Over the last few weeks, the world has witnessed the horrific events unfolding in Japan.

First an earthquake of enormous proportions. Then a tsunami which leveled everything in its path. There has been untold tragedy, the displacement of thousands of people and now the problem of radioactivity contaminating the environment, including the food chain.

Even for the third largest industrial economy in the world, it will be a massive undertaking to work through this disaster.

Scrap metal recycling facilities in Japan will certainly have an important role to play in the painful process of reclaiming the metal required for rebuilding. Unfortunately, as part of this process, they will now have to be particularly mindful in their monitoring of radioactivity in these metals to avoid ‘hot’ or radioactive sources from being melted down and moving along the supply chain. After the Chernobyl disaster in 1986, there were at least a few instances of people trying to illegally remove tons of radioactive material from the Exclusion Zone. A very dangerous problem indeed. Radioactivity…The World’s Most Silent Killer Metal can be radioactively contaminated either from natural sources or from artificial sources. Increasingly, international trade and transport of metal has caused growing concern in this area from the points of view of the health, environmental and financial risks associated with contamination. One can only imagine the problems that result from radioactive material slipping into the supply chain and resulting in it being used to form the steel used in buildings, machinery or even cutlery. French authorities made headlines in 2008 when they advised that as many as 500 sets of radioactive buttons had been installed in elevators throughout the country. 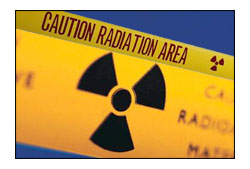 To counter this risk, aggressive measures of prevention and detection are constantly being stepped up on an international basis at all levels of intervention. Large scrap yards monitor all incoming material. Steel mills also have gate monitoring systems in place as well as secondary monitoring and beyond to ensure that if there are any radiation sources they are detected before the metal is melted or again after it is melted and before the molten steel is poured into casting equipment. The reality is that there are no one hundred per cent guarantees. However we can rest assured that the concern with radioactive contamination of metal is one that is not being overlooked and is being addressed on a global basis. The disaster in Japan will refocus these efforts.