Our friend and associate Jim Murray of Onwords & Upwords, who has been working with us for a number of years helping us manage our communications, passed on an Associated Press Article this week  concerning a bronze sculpture which had been stolen from the Johannesburg Art Gallery in South Africa and destroyed for its scrap value. This was not the first such incident and unfortunately, it likely won’t be the last.

Sadly, the art gallery is not in the financial position to provide sufficient insurance protection for its assets. Very few of these types of  thefts, which are occurring on a world wide basis, are ever solved since the sculptures are usually destroyed and then sold for scrap metal. The AP article quotes Noah Charney of the Association for Research into Crimes Against Art as saying that “when art is destroyed…that is an irrevocable attack on beauty, culture and civilization.” True indeed.

Art & Architecture Are At Risk Everywhere. 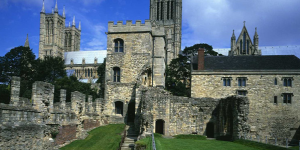 At the time of writing, October 27th, 2011, the Telegraph in the U.K. headlined, “Metal theft epidemic one of the biggest threats to UK’s heritage.” The article was prompted by thieves who had stolen the roof from the historic Bishop’s Palace in Lincoln, “one of the most significant medieval ecclesiastical ruins in Britain.” The article written by Andrew Hough and David Millward goes on to cite a number of other examples and notes that the problem is so severe that critical funding for maintenance at some of these sites has had to be diverted for extra security. http://tinyurl.com/3q3dqox

Metal theft is always problematic and increasingly we are seeing reports of various incidents in the news. Again just this month, for example, there was an entire bridge torched, dismantled and sold for scrap in North Beaver Township in western Pennsylvania. Not the first bridge, incidentally. Perhaps the most notorious was a 200 ton bridge that was stolen overnight in Khabarovsk in eastern Russia in 2008.

Where infrastructure is involved, it is particularly dangerous as it can affect transportation systems, hospitals, the electrical grid and the safety and health of entire communities.

The Scrap Metal Industry Can Also Be Victims

There are other serious concerns and we have touched on several of these in a previous blog entitled. ‘Scrap Metal Theft…The Unintended Consequences of Good Fortune’. As noted in that blog, the scrap metal  industry itself, as a repository of metals, is often a convenient target for these crimes. The scrap metal industry has long been actively engaged in trying to reduce the problem of metal theft. Along with other stakeholders, we have focused on prevention and more aggressive prosecution of these crimes. In North America, an interactive theft reporting system has been established by CARI (the Canadian Association of Recycling Industries) and ISRI (the Institute of Scrap Recycling Industries) in the United States. Reports of stolen material can be posted at www.scraptheftalert.com From there bulletins are sent out.

Once we are aware, our buyers can be watchful and will have specific contact information in the event that stolen material is brought to their yard. It is a responsible and effective system. Here is an example from a few years ago where we were alerted by a metal theft bulletin and it ultimately resulted in arrests.